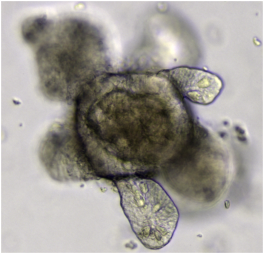 According to The World Health Organization, 13% of adults worldwide (600 million people) currently suffer from obesity. In addition to causing/increasing the risk of heart diseases, arthritis, and diabetes, obesity is also a well-established risk factor for certain cancers of the colon, breast, esophagus, pancreas and liver. But it’s not clear how obesity can cause cancer, and this remains a very active area of cancer research today.

Recently, researchers at The Massachusetts Institute of Technology (MIT) unexpectedly discovered a link between high-fat diets and intestinal cancers (Beyaz et al. 2016). When mice were fed with high-fat diets, normal cells in the intestine were suddenly converted into stem cells. Generally speaking, stem cells are unspecialized cells with the ability to either make more specialized cell types, or generate more stem cells. For example, intestinal stem cells can divide to create cell types that are responsible for absorbing nutrients (enterocytes), and other cell types that secrete mucus into the gut (goblet cells). Interestingly, when the researchers took out these new stem cells and grew them on a petri dish, they were even capable of forming “mini-guts” in the lab (see image above)! But what does having more stem cells have to do with intestinal cancer? How could having more stem cells cause cancer?

Certain properties of stem cells, such as their ability to continuously divide to replace lost tissue without exhaustion, can be taken advantage of by cancers to drive their own growth. This is not a new idea; in fact, the link between stem cell function and cancer itself has been quite well established from scientists in our own neighbourhood! In the 1990s, researchers in Toronto were first to discover that leukemias contain rare “cancer stem cells” which maintain the cancer much like normal tissue stem cells (Lapidot et al. 1994). This relationship between stem cell frequency and cancer risk was also the subject of another recent controversial study, which demonstrated a correlation between the number of stem cell divisions and the risk of developing cancer over a life time, for different human tissue types (Tomasetti and Vogelstein 2015). Here, the authors explained that each time stem cells divide, they carry an inherent risk of acquiring a cancer-causing DNA change, suggesting that stem cells are really at the root of many cancer types.

The answer for this current study lies in the change of a single gene. When researchers changed a gene called Apc in intestinal stem cells, they found that only those which are subjected to conditions that mimic high-fat diets are able to form tumours in mice. Therefore, rather than acting as a direct source of cancer, high-fat diets seem to increase the number of cells that are capable of being “transformed” into cancer cells by changes in their DNA.

So what does this potentially causal link between obesity and cancer mean in practical terms? First, we know that obesity is only one of many different risk factors linked to cancer. Some (such as smoking) are well-established, while others (such as cell phone use) are still debated. Having a better understanding of how these factors contribute to cancer will hopefully allow us to make better lifestyle decisions on an individual basis, and prevent cancer from ever arising in the first place. As well, the knowledge of how high-fat diets activate intestinal stem cells might also allow researchers to identify new drugs that halt intestinal tumour growth.

This article was written by Kevin Lan, who is currently finishing his PhD at the University of Toronto. He is studying how brain cancers become resistant to current cancer therapies. To learn more about Kevin and his research you can visit our members page.