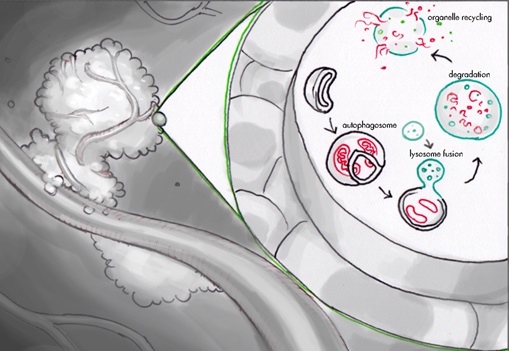 The Nobel Prize, established by Alfred Nobel in 1895, is the highest award an individual can receive for their academic, cultural or scientific contributions.  Alfred was himself a chemist and inventor who amassed a fortune by inventing Nobel’s Blasting Powder, or dynamite, and subsequently became a major armaments manufacturer.  His invention changed the world- and although it revolutionized the mining, quarrying and construction industries, Nobel struggled with feelings of guilt as he realized the death and destruction he had brought upon society.  In his will, he established the Nobel Foundation with the mandate to use his wealth for the greater good by awarding a prize to individuals who “confer the greatest benefit on [human]kind” in physics, chemistry, physiology or medicine, literature and peace.

This year, the Nobel Prize for physiology or medicine was awarded to Dr. Yoshinori Ohsumi for his discoveries of the mechanisms for autophagy.  What is autophagy you may ask?  Turns out you are not alone- on the Nobel website, which typically attracts a highly scientific audience, 44% of people randomly polled had never heard of it before.  So what is so special about autophagy when hardly any one knows what it is? Let me explain why this research is so important and what it means for cancer.

Autophagy, also known as “self-eating”, is the controlled break down and recycling of cellular components, which is an essential part of a cell’s normal housekeeping duties.  Similar to an aquarium, a cell can be thought of as a closed ecosystem where only a limited amount of resources exist; they need to be preserved and reused.  Over time, cellular structures, both large and small, break down, get old or are damaged by normal wear and tear.  The cell recognizes they need to be replaced and sends a signal to begin the autophagic process by “fencing off” the target in a structure called an autophagosome, marking it for recycling.  The autophagosome then fuses with a lysosome, which is full of enzymes that can break down any biomolecule into its raw components.  These pieces can then be used as building blocks for new, or other cellular components.   Dr. Ohsumi was the first to identify the genes necessary for autophagy.  When they fail or go haywire, cells cannot functional normally and this is the root cause behind many diseases including cancer.

Cancer cells use autophagy in very unusual, abnormal ways.  The reasons behind “why?” or “how?” are very poorly understood, and are active areas of research.  What is really interesting, is that scientists have seen autophagy involved in both promoting and preventing cancer, depending on the stage of tumour development or the type of cancer.  In early stages, it can inhibit cancer growth by preventing the accumulation of any damaged proteins or structures, keeping cells healthy and happy.  In more advanced tumours, on the other hand, when faced with chemotherapy or radiotherapy, cancer cells deliberately use autophagy to cope with these stresses and to repair or replace any damaged structures.  Autophagy also allows cancer cells to keep producing energy to survive and grow in conditions where a normal cell wouldn’t stand a chance.  For example, in environments where cells have no access to nutrients to grow, cancer cells can recycle and re-direct their existing nutrients into pathways that allow them to survive and continue to grow. Fortunately, this process can be exploited to restore sensitivity to chemotherapy, increasing response to treatment, which makes it a highly promising and exciting area of research.  Just earlier this year, here in Toronto, the research group of Dr. Peter Dirks at SickKids Hospital showed that when dopamine (a signaling molecule in the brain) receptors are “turned off”, autophagosomes accumulate and contribute to the death of brain cancer stem cells.  This opens the door for new therapeutic strategies as this is typically a notoriously difficult population to target.

Despite that fact that most people haven’t heard of autophagy, the pioneering work of Dr. Yoshinori Ohsumi has massively advanced our understanding of both normal and cancer cell biology, opening up countless avenues of research.  As with all Nobel laureates, their legacy will impact generations to come.  Congratulations on winning the Nobel Prize, Dr. Ohsumi, and thank you.

This article was written by Mike Pryszlak. Mike is currently completing the fourth year of his PhD at the University of Toronto. He studies how normal stem cell genes are changed in cancer stem cells. To learn more about Mike and his research check out our members page.